Expect the unexpected. The adage could be the motto of Tess and Marc McWilliams’ relationship, from their initial meeting to their engagement to their wedding.

The pair first met four years ago on a very blind date arranged by mutual friends—neither had any idea they were being set up, and Tess did not take it well. Fresh from a college class, she went to meet her friend for lunch rocking messy hair, yesterday’s makeup, sweatpants and a big coat…not exactly her typical date look.

“The whole time I’m sitting there, I’m just so angry at my best friend for letting me show up like this to meet someone for the first time,” Tess explains.

She was so angry with her friend that Marc initially thought she didn’t like him, but their pals continued to play matchmaker, and Tess and Marc ended up at their friends’ house, where they talked all day.

The relationship grew from there, and after several years together, Tess was ready for an engagement. Then came the day—or so she thought. Marc took her to all their favorite Kansas City spots…and then nothing happened. But the very next day, Tess woke up to hear her and Marc’s song, Childish Gambino’s cover of “So Into You,” playing. Marc made coffee and popped the question at home. He wanted to pick a moment when she was least expecting it, he explained.

Tess wanted to get her dress first and let its style inform the rest of her wedding preparations. But her initial gown shopping experience left something to be desired—the sales associate pushed her own favorite styles on Tess despite her protests, and the bride-to-be hated everything she tried on. When she told her coworkers about the experience, they encouraged her to check out Savvy Bridal. The laid-back atmosphere and ability to choose gowns to try on for herself quickly won Tess over.

Looking at the available dresses, a two-piece Enchanting by Mon Cheri design caught her eye, but she was too afraid it would be out of her budget to check the price tag. She tried it on but quickly took it off for the same reason—she didn’t want to fall in love with something she couldn’t afford. Then she found out the very affordable price.

“Wait, what? Can we put it back on?” she remembers saying. “I put it back on and then I just started bawling because I could see everything happening. I was like, ‘I want a beach wedding.’”

The couple considered their options and chose to elope to San Diego. They booked with a vendor that claimed to provide a spot on the beach, an officiant, and a photographer. Altogether, their planning process clocked in at about six hours—but the doubts about whether it had all been too easy lingered for much longer.

Fortunately, the vendor wasn’t too good to be true, and after a few hiccups (like their intended spot on the beach being a construction site), the bride and groom exchanged their vows on Feb. 9, 2018, in front of an unexpected guest—a tourist who ended up recording their entire ceremony on her phone, much to everyone’s amusement.

It wasn’t the least surprising moment of the day. After saying “I do” and sharing a kiss, Tess threw her arms into the air…and accidentally flashed everyone on the beach.

“We just start cracking up and the photographer goes, ‘I promise I did not get that shot!” Tess laughs.

Beyond her clear sense of discretion, the photographer impressed Tess by encouraging the couple to act naturally for photos rather than posing them.

“When you’re not told what to do, you can really see how happy we are in every single picture and how much that day meant to us,” Tess says.

The couple stayed in San Diego for their honeymoon and arrived at their Airbnb still in their wedding attire because they didn’t have anywhere to change. The hospitality of their hosts and the beautiful cabin where they stayed helped make for a wonderful trip.

In fact, their whole wedding experience is one she recommends.

“If you really do not want a lot of stress, elope and elope to someplace both of you would love to discover and learn more about,” Tess says. “You learn so much more about each other and you learn a lot about this new place that you now have a new adventure in and a new love for.” 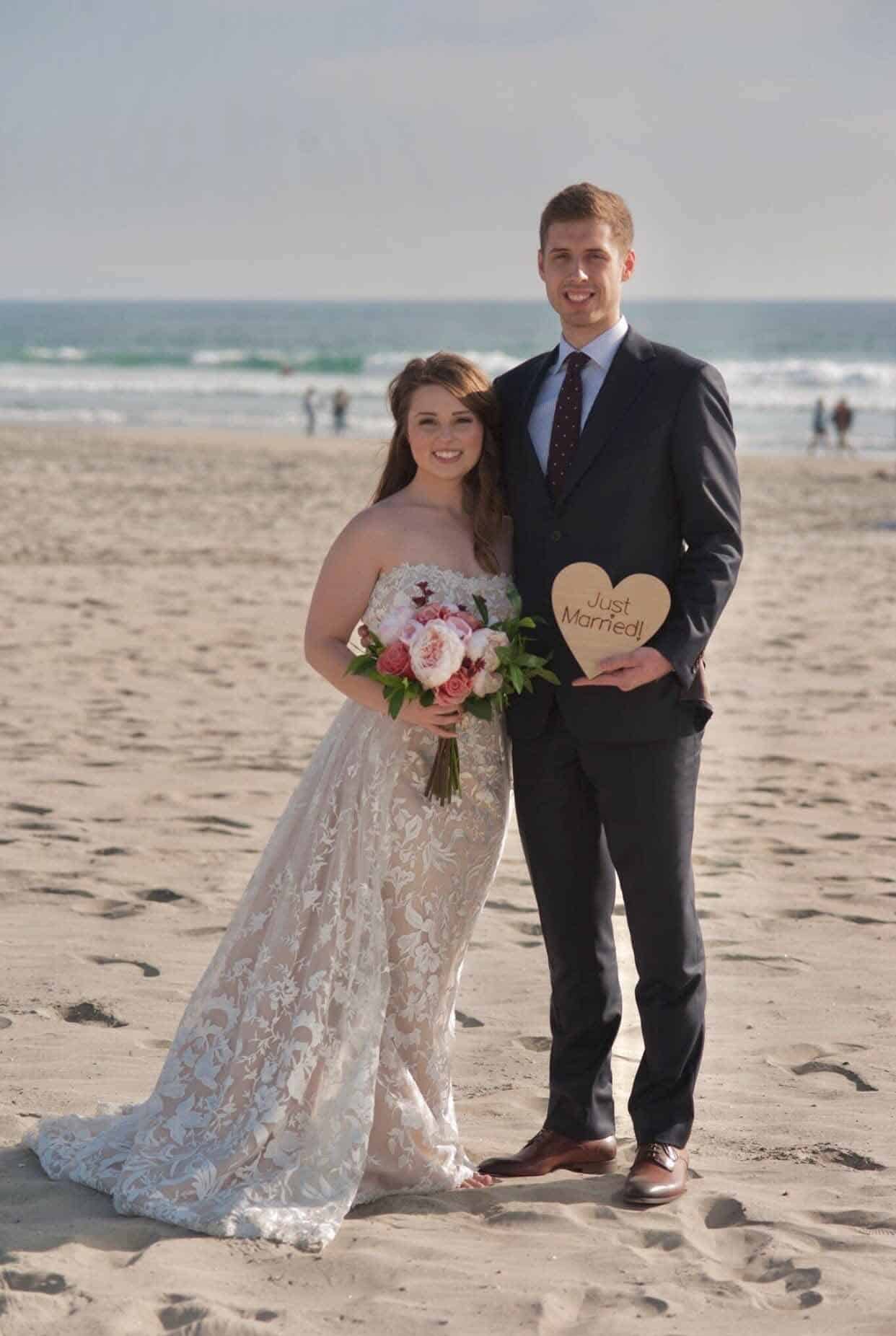 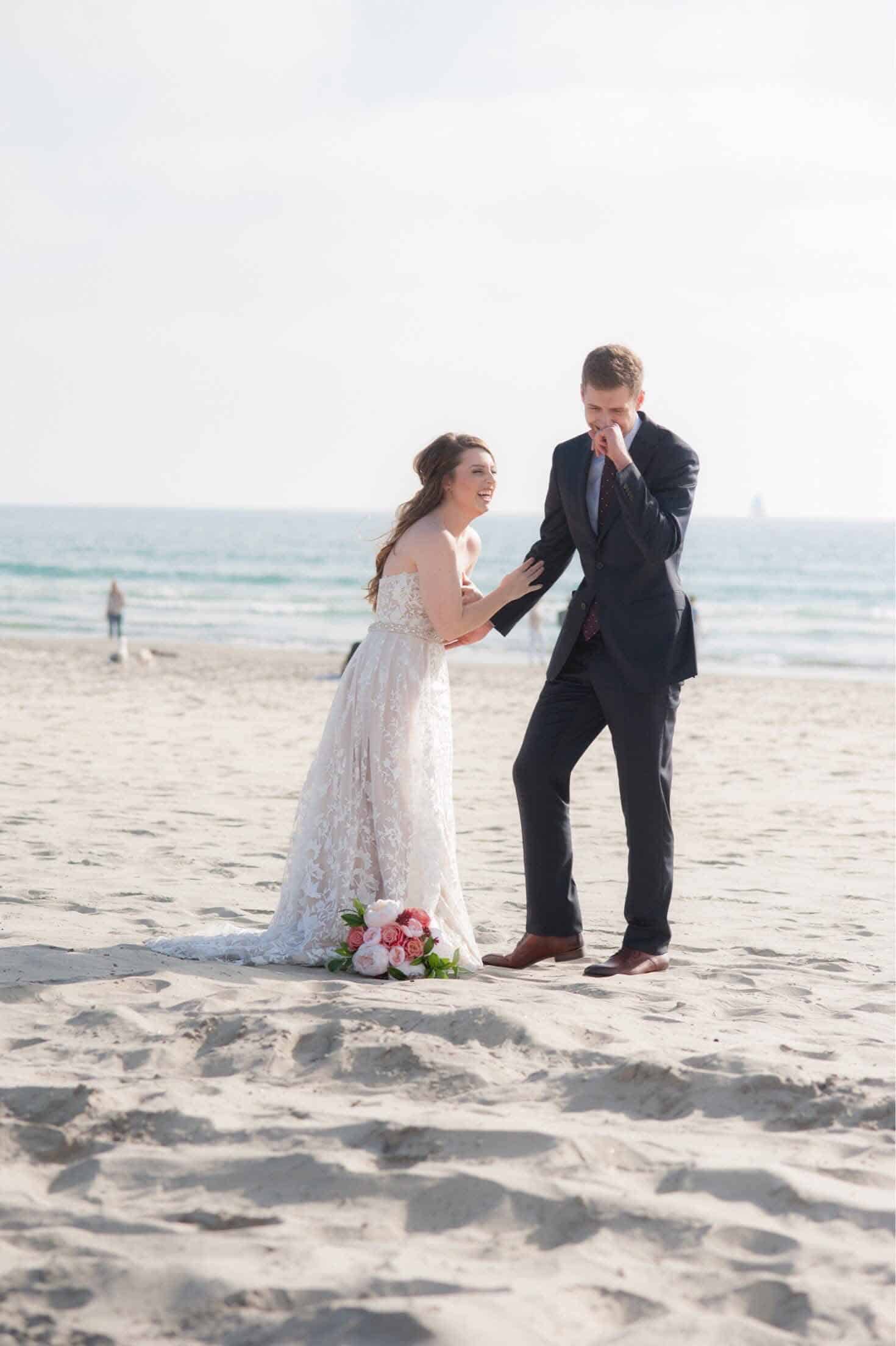